Anthology horror movies are a mixed bag in more ways than one. Often times they have flashes of brilliance in one short and everything else falls flat. XX (2017) is a collection of four short films written and directed by women. It is an excellent example of an anthology done exactly right. It captures a consistent tone with distinct style differences between all the shorts.

First off there’s an amazing stop animation frame story directed by Sofia Carrillo. It’s creepy and is about dolls. That’s absolutely all I need in something ever. It is a full enough tale unto itself that it almost counts as fifth short. It sets the tone from the get go that you’re in for a quirky and slightly unsettling ride, but ends on a sweet note.

Which leads us to the shorts themselves:

Based on a short story by Jack Ketchum, a boy asks “what’s in the box?” to a stranger on the train. The stranger shows him and proceeds to lose his appetite and stops eating altogether.

Let me just take a second to say that the answer to “what’s in the box?” is never ever something good. It just isn’t. So don’t ever ask it in real life. Did se7en teach us nothing? Now that we’ve established that, the Box feels like a psychological mind fuck about how mothers can feel alone and isolated even amongst the people who love them most. 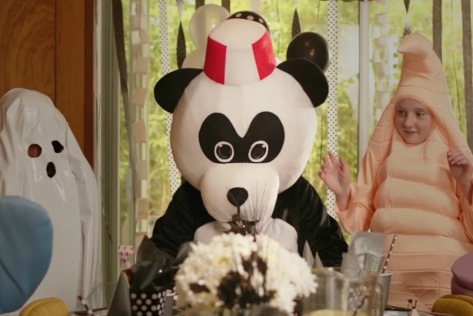 Annie Clark is better known to the world as St Vincent and she makes some of the most amazing music ever. Here she delivers a psychedelic and delicious black comedy about the lengths we’ll go to for our kids. It is my favorite in the four films. It walks a perfect tightrope between dark, weird, funny and still making sense.

Her Only Living Son
(Karyn Kusama)

Eighteen years after living on the run, a woman must confront who (or what) her son really is or if he is even really her son. Another one that is pretty straightforward, but speaks so much to the strength of women even with things they have very little actual control over.

What XX offers us is a unique take on women in the horror genre. It is the rare film that doesn’t depend on over sexualisation or damsel in distress cliches. This is one of best shot and well crafted collections to come along in awhile. Every single one of these women has a unique and much needed voice. These stories are just good stories. XX is completely worth a watch.

In my experience people either love or hate Henry Rollins. Honestly, I get both sides of that argument. I personally have no issues with the man. Yes, Black Flag was a better band with Keith Morris, but Rollins has never embittered me like he has others I know.

All of which brings us to the film of the day, He Never Died (2015). Jack (played by Rollins) is a mysterious man who lives alone and just wants to be left that way. He had a mysterious and dark past alluded to in dreams. He goes out to play bingo and to the same restaurant to eat and that’s about it. One day the past comes knocking on his door in the form of a daughter he didn’t know about and his comfortable day to day existence is thrown into chaos. We find out that Jack has lived a very long time and cannot to all appearances be killed despite occasionally seeing actual literal Death hanging around from time to time.

Henry Rollins is basically playing Henry Rollins (albeit the immortal variety) here. Enjoyment of this movie hinges very much on which side of the Rollins fence you reside on. He does turn in a solid performance however. Kate Greenhouse also turns in a fantastic performance as Cara, someone who goes from having a crush on Jack to wanting nothing to do with him whose drug along for the ride.

If He Never Died suffers from anything, it’s a sense of meandering through the plot at times. As much as this may have been intentional from the stance of here’s a man whose lived a very long time and ennui is bound to set in, it does make it difficult to drive a story at times.

He Never Died is dark, funny and unexpected storywise. Underneath everything there’s a vein of hopefulness. None of us wander so far that we are completely lost and undeserving of some form of love. More than anything, that heart is what sells this movie. (Even though some rad gore scenes don’t hurt either.) It’s pretty much destined to be a cult film, but in the best possible way.

Have you ever found yourself wondering what would happen if Bret Easton Ellis had written the Breakfast Club? Probably not, but if you had Bad Kids Go to Hell is there to assuage your curiosity.

Six kids that attend prestigious Crestview Academy show up for Saturday detention where they learn something about themselves and that they’re not so different after all. Things like they all could die before the day is out. Will Mommy or Daddy even care if what may or may not be a Native American curse kills them? Can you fit in having meaningless sex while being scared for your life? What is that awful, terrible thing they did last summer? And will Judd  Nelson ever actually show up in this movie since he has main billing?

There’s the Princess (daughter of a sociopathic politician), the Athlete (token black dude), the Brains (hot redhead with big boobs and immigrant from some unspecified country), the Criminal (scholarship student) and the Basket Case (Pagan who claims to talk to her dead parents through seances). Judd Nelson plays the headmaster. There’s a big statue in the middle of the library where they’re to serve their detention. There’s a kind of creepy janitor that always seems to be around.

If all this sounds familiar, it should. Bad Kids Goes to Hell owes a lot of its good moments to these homages to the Breakfast Club. It’s the Breakfast Club through the lens of a Bret Easton Ellis novel though. Murder, mayhem and a lot of stylistic sex and violence instead of a heartwarming tale about disaffection with authority and temporarily putting aside differences. There’s still plenty of disaffection, but no one has time to put aside differences once bodies start hitting the floor.

After watching, I found out that Bad Kids Go to Hell is based off a graphic novel. One can’t help being left with the feeling that perhaps some scenes worked far better in that medium. Fast paced cut scenes and flashbacks with out of this world physics especially.

Bad Kids Go to Hell is a fun enough film and horror comedy is notoriously difficult to pull of well. It suffers from style over substance as it strings together cliches in an attempt to be more clever than it really is. (Again, much like the majority of Bret Easton Ellis’ work is.) There’s a half way decent unexpected ending, but it also feels a little hollow motivation wise. By then though it’s clear no one really has any motivation for anything they do so it doesn’t even really matter.

(Fun extra fact: Upon investigating IMDb, it turns out there’s a sequel called Bad Kids of Crestview Academy that recently came out. The headmaster is played by Sean Astin.)