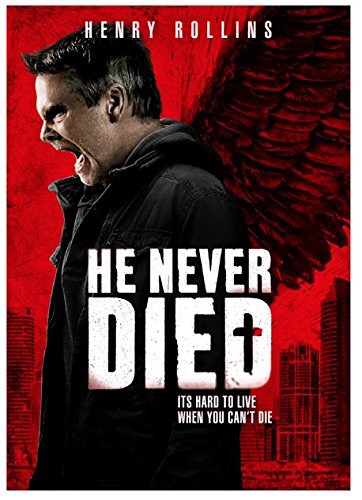 In my experience people either love or hate Henry Rollins. Honestly, I get both sides of that argument. I personally have no issues with the man. Yes, Black Flag was a better band with Keith Morris, but Rollins has never embittered me like he has others I know.

All of which brings us to the film of the day, He Never Died (2015). Jack (played by Rollins) is a mysterious man who lives alone and just wants to be left that way. He had a mysterious and dark past alluded to in dreams. He goes out to play bingo and to the same restaurant to eat and that’s about it. One day the past comes knocking on his door in the form of a daughter he didn’t know about and his comfortable day to day existence is thrown into chaos. We find out that Jack has lived a very long time and cannot to all appearances be killed despite occasionally seeing actual literal Death hanging around from time to time.

Henry Rollins is basically playing Henry Rollins (albeit the immortal variety) here. Enjoyment of this movie hinges very much on which side of the Rollins fence you reside on. He does turn in a solid performance however. Kate Greenhouse also turns in a fantastic performance as Cara, someone who goes from having a crush on Jack to wanting nothing to do with him whose drug along for the ride.

If He Never Died suffers from anything, it’s a sense of meandering through the plot at times. As much as this may have been intentional from the stance of here’s a man whose lived a very long time and ennui is bound to set in, it does make it difficult to drive a story at times.

He Never Died is dark, funny and unexpected storywise. Underneath everything there’s a vein of hopefulness. None of us wander so far that we are completely lost and undeserving of some form of love. More than anything, that heart is what sells this movie. (Even though some rad gore scenes don’t hurt either.) It’s pretty much destined to be a cult film, but in the best possible way.